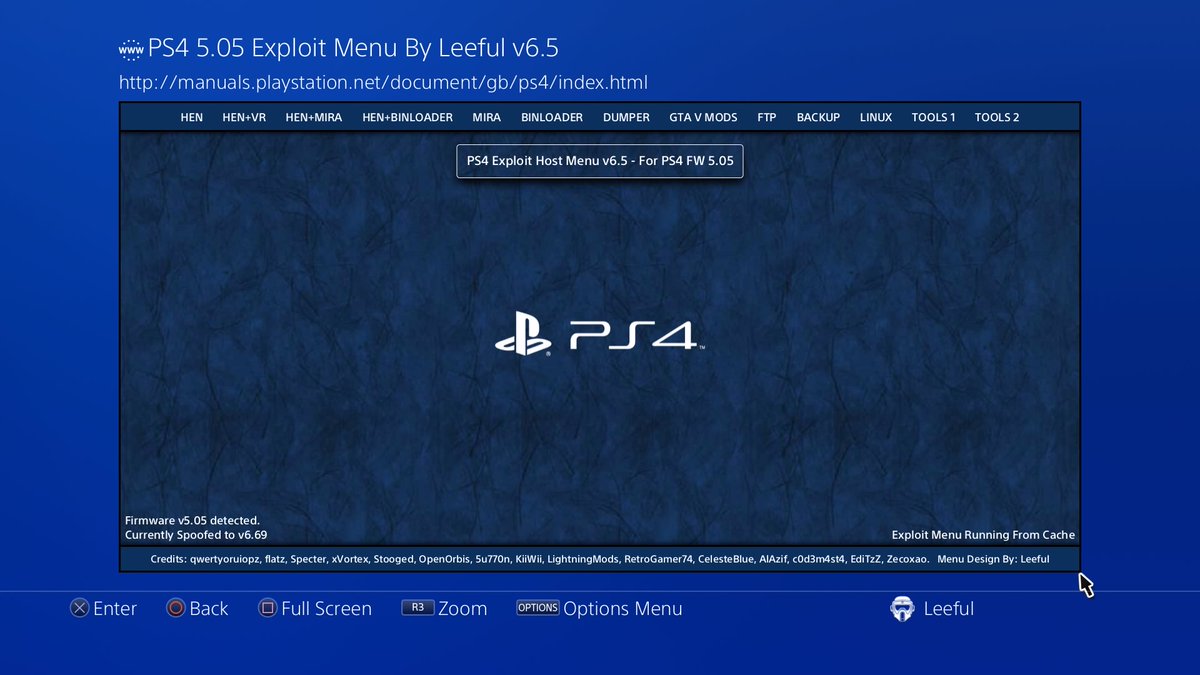 Leeful one of the developers behind X-Project has released his own Exploit Host software, it is something he had been working on before he started to collaborate with DefaultDNB on X-Project, here is a quote from the source:


This time I have totally rewrote my exploit menu from the ground up and it is now faster to load, faster to cache and faster to load from cache on the PS4. All this is possible because I have managed to reduce the overall file size from 150MB to 14MB for the self host version.

The amazing part is that I have even been able to reduce the files down even more for the ESP version and now for the first time ever, the COMPLETE Host Menu will now fit on an ESP device. That is all 66 payloads including ALL 14 GTA V Mod Menus!!
Click to expand... 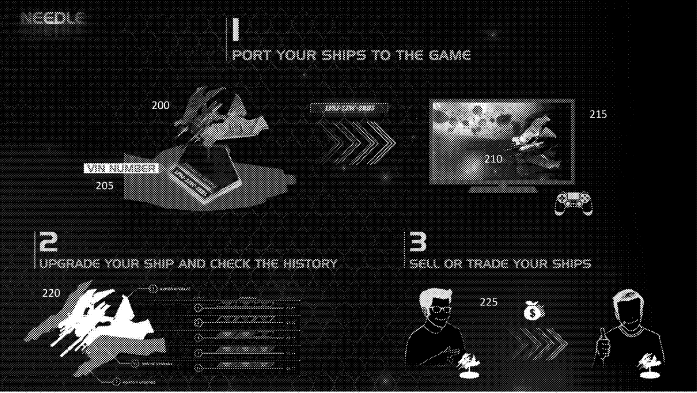 This old patent from Sony which was originally filed back in 2015 and published in 2016 was renewed on the 26th of March 2019, now there seems to be a bit of confusion over what this patent is, with some websites claiming that it is for trading digital games, which is not the case.

This patent is for a device like an amiibo which you can scan into a game, then if you wish you can trade the digital copy of that "amiibo", here is a description of the patent: 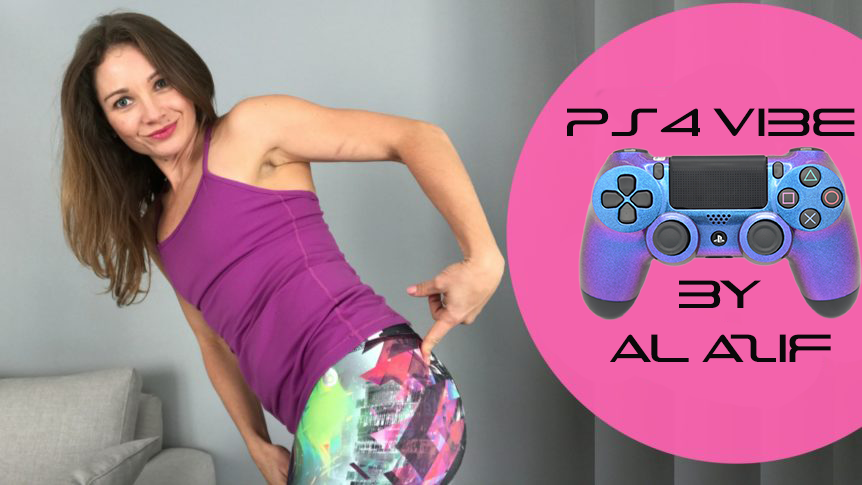 Have you ever had a yearning to shove a vibrating controller shaped rainbow in your ass? If your answer is yes, then this new version of PS Vibe by Al Azif will be right up your back alley, of course this app does have other uses not affiliated with your ass, you could open your own night club and have several PS4 controller strobing away to the beat of the music, the choices and possibilities are endless. View Forum Article For Download...
Continue...
PS3 PS3 HFW (Hybrid Firmware) 4.84.1 (HAN ready) for OFW users
4 7,883 by tunip3 : Mar 21, 2019 at 10:59 PM

heres what it says

Today, we proudly present the very first modified OFW that can be installed on all PS3 models.
(NOTE: THIS IS NOT A FULL BLOWN CFW, HOWEVER IT Allows you to run the patched webkit exploit that's ported to 4.84)

Yes, you didn't hear wrong, it can be installed over

ALL OFW versions on ALL PS3 models

We wanted this to be called "HHHFW" since it was Hybrid, Hack-able, HAN ready also inspired by @habib but let's call it HFW since this is Hybrid FW (Well you can call this MFW).

The idea was reminded by some guy who didn't want to be annoying but actually ended up being helpful.
https://www.psx-place.com/threads/just-a-suggestion-dont-get-mad.23072/

Habib had this idea long time ago but the previous attempt was not successful due to lack of interest and preparation.

As you all know, I recently started messing with my PS3 again and this idea was brought back.

So then I went ahead and tried his magical idea.... after a few hours later... Boom!!, now we have HFW that works on all PS3 models (including 3K and 4K) that allows the previously patched exploit by using old webkit from 4.50 that's been used until 4.83. This method is rather hacky than technical, so I would like to leave this method under the radar for now until it gets patched out (this can easily be patched).

1. You can use PSN since the FW is the latest.
2. You can downgrade your PS3 if your model is downgrade-able/hack-able (excluding CECH-3K and 4K)
(The same capability as what you...
Click to expand...

Google is hosting a special gaming announcement set to take place at this year's GDC 2019. It's finally time to see what the company has up its sleeves, and what they have planned for the future in regards to gaming. The stream is now live, and you can watch the above video, or check back here to read GBAtemp's live updates.

Google wishes to build a game platform for everyone, bringing together all forms of gamers. This has been named the Stadia.

The Google Stadia will run on as many platforms as possible, from the Chromecast, to Android, to PCs, where games will be streamed using Google's low latency technology.

When watching games on YouTube, you'll be able to click a single "play now" button to instantly try any supported game in your browser, without downloading, without updating, or without any interruptions.

The goal is to lower the barrier to entry, so that gaming is more accessible.

Google will also be making their own controller which will connect through wifi to the host game session in order to reduce input lag. There will be a share button and a Google Assistant feature.

Unreal, Havok, and Unity engines will support the hardware, which will run off Linux. Each game will run off of Google's data centers.

ID Software has gotten their upcoming DOOM Eternal working on the Google Stadia, and will be bringing it to the platform.

Google will also have its own first party development studio, Stadia Entertainment, which will create games for the platform.​
Continue...
Orbital, an experimental PS4 emulator, now supports video output
0 718 by tunip3 : Mar 20, 2019 at 5:50 PM

The developer AlexAltea (Alexandro Sanchez) has uploaded a video showcasing some very interesting developments made to his own PS4 emulator called "Orbital". The major feature being showcased, however, is the emulator being able to output graphics for the first time, which is made possible thanks to a reimplementation of the PS4 GPU graphics pipeline and a recompiler for AMD'S GCN bytecode.

In the aforementioned video Orbital is shown booting a PS4 5.XX kernel into safe mode and displaying a CE-343XX error, which can be taken as reminder of how it's still not meant for users at the moment as it's not able to emulate a working system just yet, let alone play any kind of games. However, the feat becomes quite impressive when taking into account that the error refers to a HDD failure, something the dev was expecting as the emulator was not booted with a valid HDD image, and also how the project has only been in development for a little more than a year.

If you need some background information on Orbital, it's an open-source PS4 low level emulator which is currently being tested with 4.55 and 5.00 decrypted kernels. The project is different from other console emulators as it's virtualization-based, something made possible by the custom x86 CPU found inside Sony's system and it consists of a fork of GRUB modified to boot PS4 targets (orbital-grub), a SeaBIOS fork for PS4 hardware (orbital-bios) and a fork of QEMU with Aeolia (APU) and Liverpool (Coprocessor\Southbridge) support (orbital-qemu).

If you happen to enjoy inserting controllers in your butt, like to see controllers vibrate or like to give the motors on the controller a workout, then this app is for you.

This was quite a popular application back in the PS3 days. 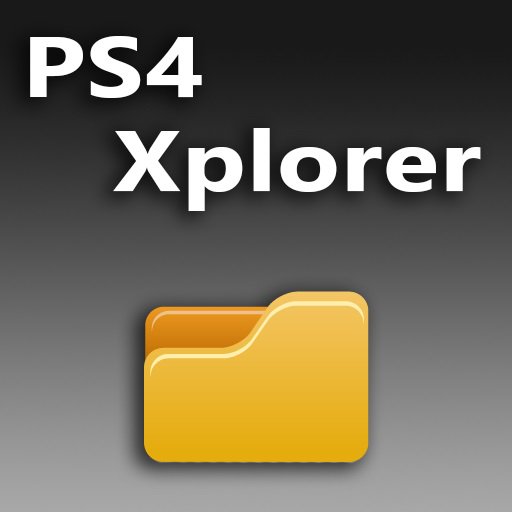 The last time i posted about PS4 Xplorer it was on version 1.05, that was just a little over a week ago and today we see the release of version 1.09.

This version add's .json support which was suggested by @TOXXIC407 as well as a lot more language translations, full change log: 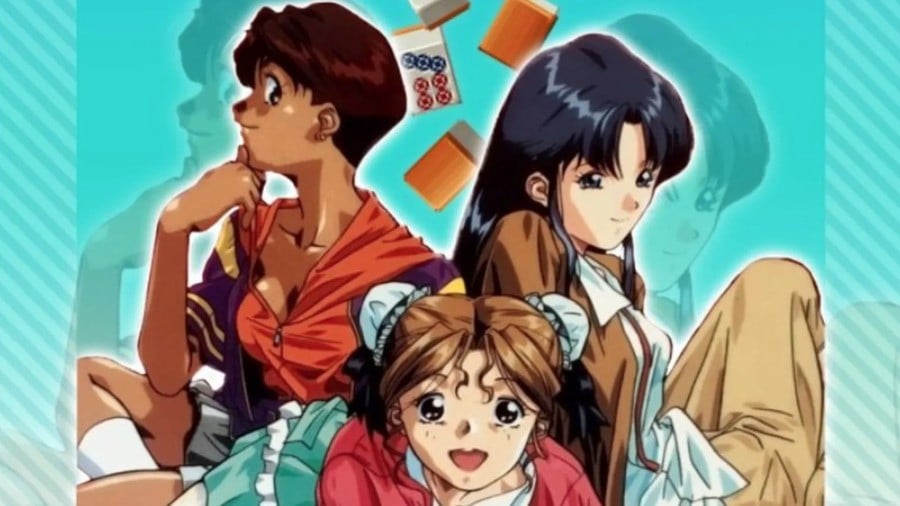 Super Real Mahjong PV has only been available on Nintendo Switch for a matter of days, but the game has already been pulled from the eShop after several scenes of nudity were spotted by players.

Super Real Mahjong is a series of arcade mahjong titles made by SETA Corporation, with many of its games being ported to the Sega Saturn (although some did make it to the Super Famicom, too). PV is a port of Super Real Mahjong P5, and it recently launched on the Japanese Switch eShop.

Unfortuantely, these beams weren't always 100% accurate in their placement, resulting in certain graphical details slipping through when they should have been fully covered. You can see an example here via Twitter user, QzakuSEGA (but be warned that the image featured may not be suitable for everyone, and is certainly NSFW).

The team behind the Switch release, Mighty Craft Co., has now issued an official statement on the matter, informing fans that the entire game is being corrected and will be once again sent to Nintendo for re-examination. Mighty Craft hopes to have the game back on the eShop next week.

Of course, the question remains: how did the game get by Nintendo's quality assurance in the first place? We'll leave...​
Continue...
Kickstarter Project Makes Custom Switch Pro Controllers For Every Smash Ultimate Character
0 485 by tunip3 : Mar 18, 2019 at 4:45 PM 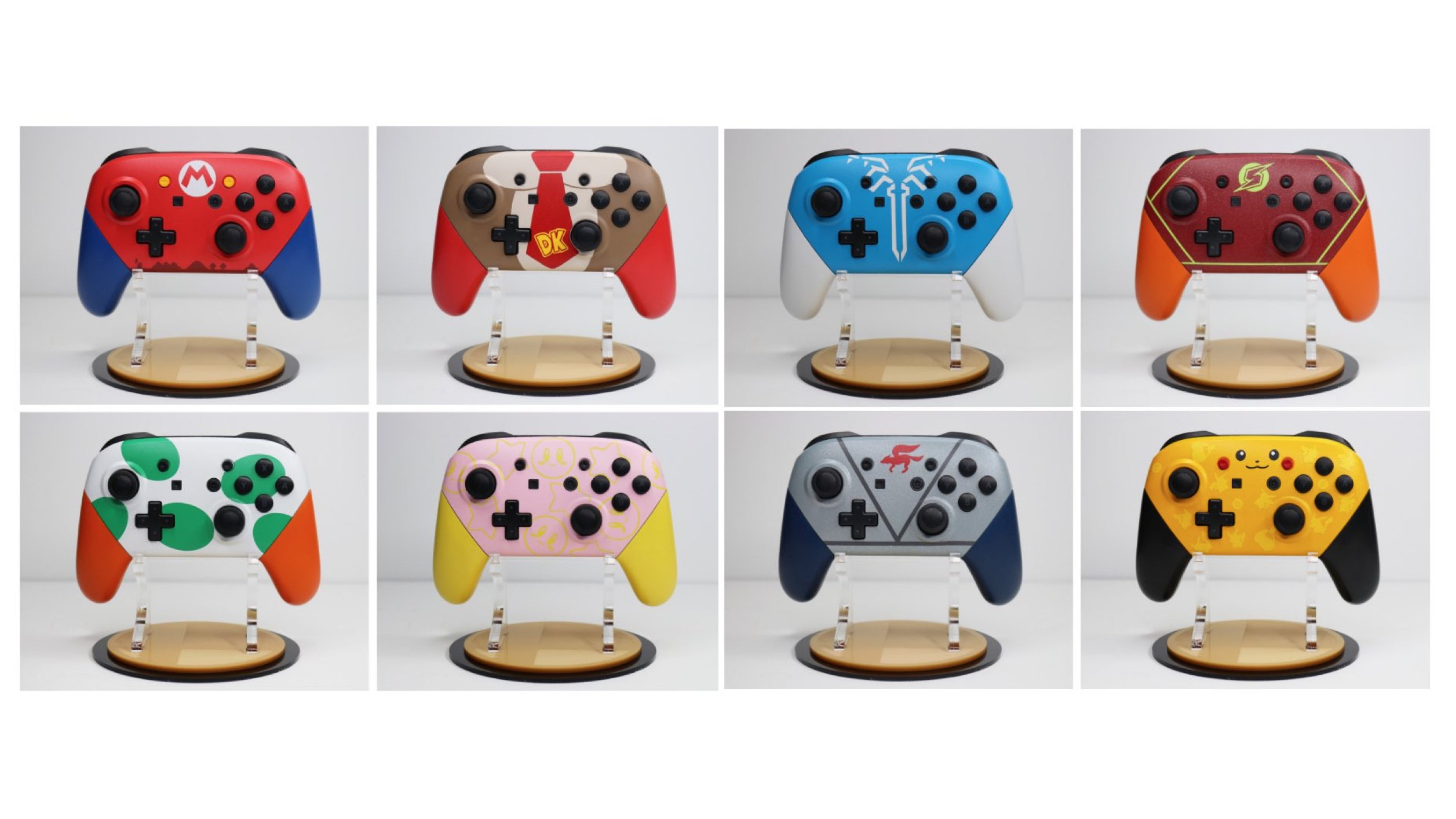 If you love Super Smash Bros. Ultimate and glorious pieces of gaming hardware as much as we do, you'll probably have a pretty hard time resisting this one. A Kickstarter crowdfunding project has recently launched offering backers a custom Switch Pro Controller featuring any character design they like from the game, and it's proving to be mighty popular.

Initially, the project had a goal of $7,500 - controllers will be made for every character regardless of whether or not someone chooses them, all to be included in a special artbook release - but this target was smashed in just four and a half hours. At the time of writing, total funds are nearing $25,000 with 27 days still left to go.

So how exactly does it work? Well, as well as cheaper options which will give you a discount on the finished book and put your name in the credits, the main backing option (set at $85) lets you pick up a customised Pro Controller featuring whichever character you like. You can see some more mock-ups below. 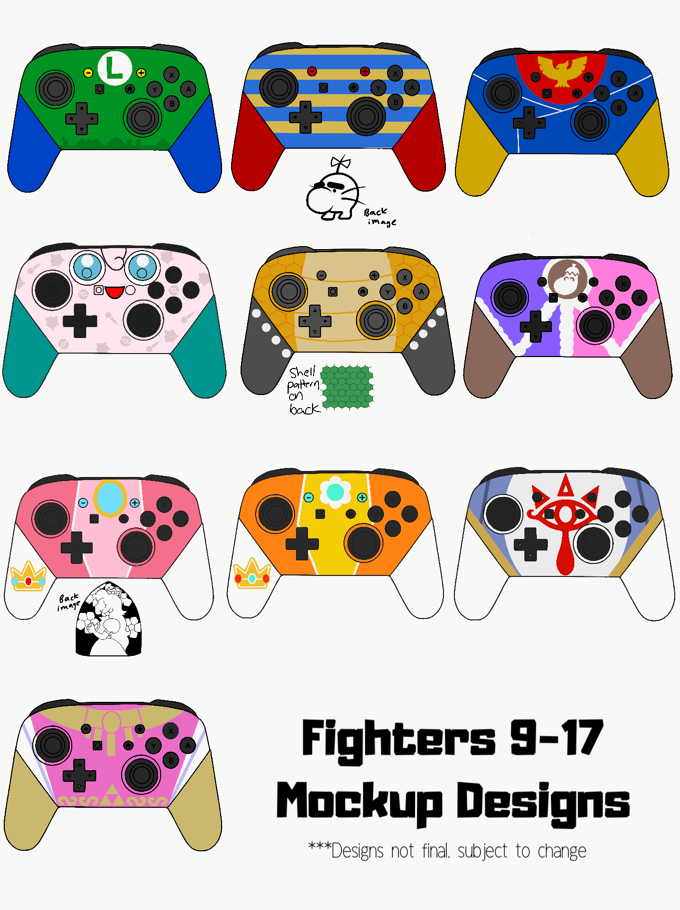 The crowdfunding page notes that the base controllers are not official Nintendo Pro Controllers - although you can upgrade to one of those at extra cost. The controllers used look and function almost the same, although amiibo functionality is not supported.

You can learn more about this and get your own controller via the Kickstarter link here.